When it comes to word game apps, we’re spoilt for choice. Across both iOS and Android there are hundreds of different applications to choose from, and even the most avid word game enthusiast couldn’t possibly have time to try them all.

However, between us at Word² we’ve definitely tried the majority, and we’ve decided to round up the best word game apps here so you know which ones are worth your time. 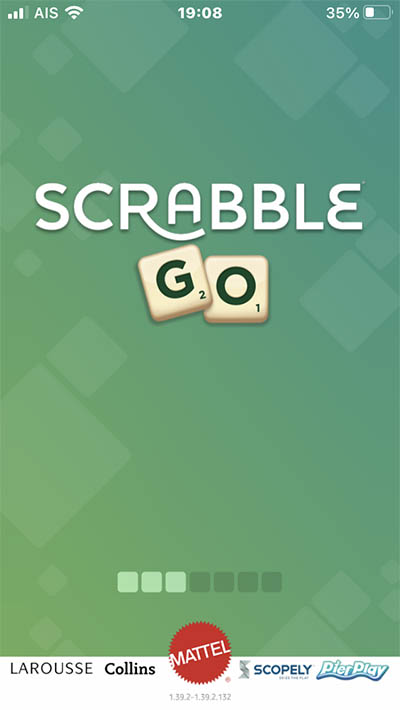 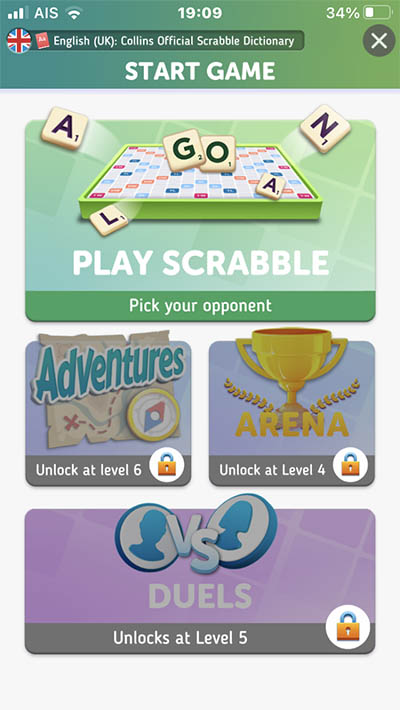 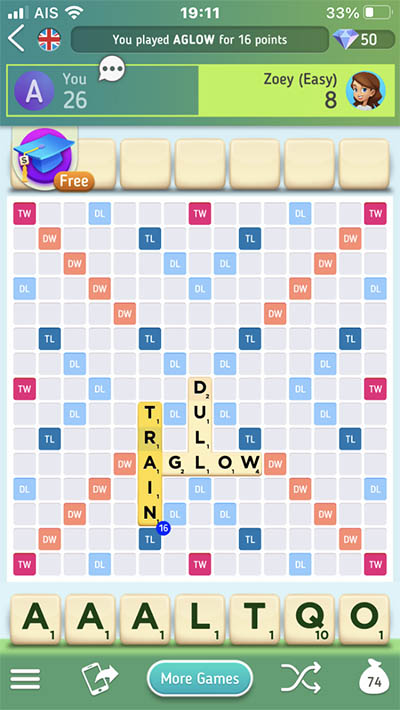 No surprises for where the app we start with when it comes to word games – much like with traditional board games, Scrabble Go is one of the most popular options to opt for.

This is great if you’re looking for other people to play online with, as even if none of your friends are online, there’s always someone to play with. The game does become a little more fun if you have a friend or family member to play with though, and it can be a great way to spend an afternoon if you’re not in the same place.

Though many will want to use it as a simple game of Scrabble, there are some additional elements to the game too. It’s filled with competitions, challenges and tournaments that can help to make the game feel a little more competitive.

I’m sure I don’t need to explain the rules of Scrabble to you here, but the apps works in the same way as the board game – just make sure you don’t get stuck with the Q or Z at the end of the game! 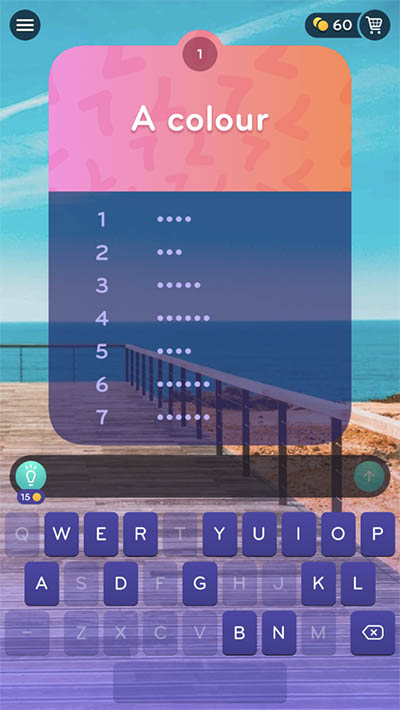 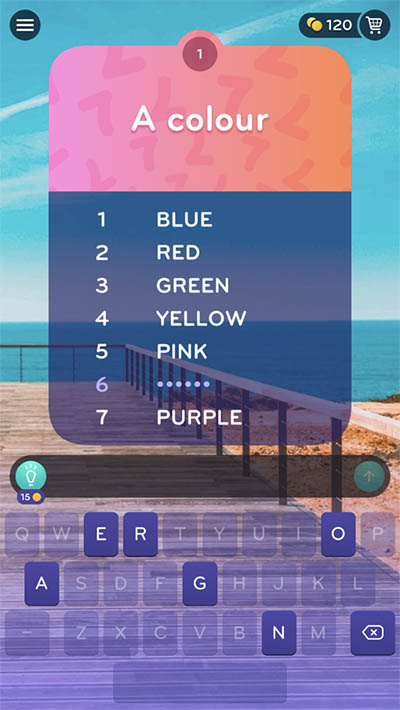 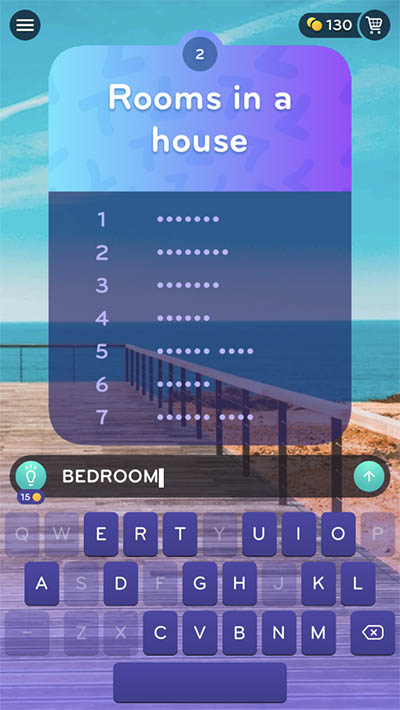 Top 7 is a little different than your standard word game you’ll find in your app store, and it’s not based off a crossword, wordsearch or anything similar. If you’re familiar with the format of the gameshow Family Feud (or Family Fortunes in the UK_)_, then Top 7 is pretty similar.

All you need to do is work out the Top 7 answers that people responded to when asked a specific question. You are given the letters to these answers, which makes it a little pretty easy to work out. As the game goes on it gradually gets a little more difficult. and although on the odd question you may need to rack your brain for an answer, it stays fairly easy the whole way throughout.

So, it’s not a good choice if you’re looking for something that’s a real challenge, and you need an internet connection if you want to play. But for casual play or playing with a family member, it can be pretty good fun. 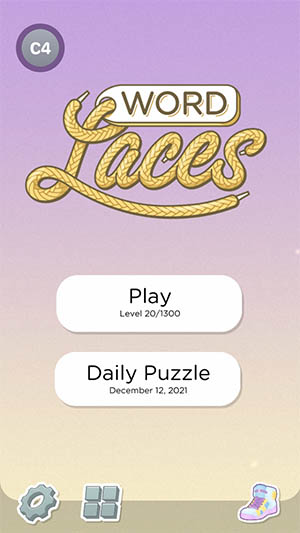 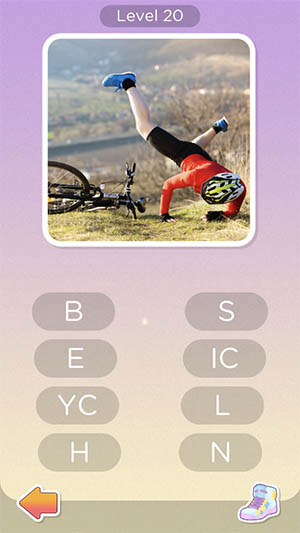 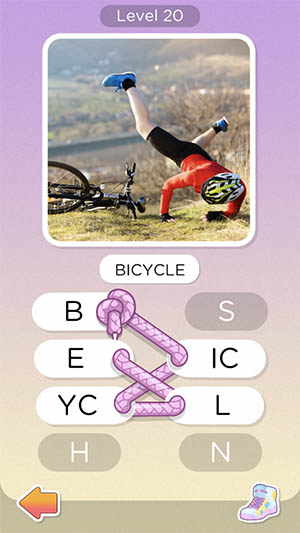 If you’re considering investing in the Apple Arcade, then Word Laces is one of the reasons you may wish to do so. Though the Arcade is filled with more action games as opposed to word ones, there are still a couple of good Word puzzles that can make the investment worthwhile.

Word Laces is a very simple game, but the UX is pretty flawless and it plays well. It’s a word jumble game, but the added element of having to put together multiple letters as well as single ones does make it a little difference.

If you’re comfortable with your vocabulary then you can go into the settings and turn the Hints off, which immediately makes the game harder – you’ll likely find yourself stuck on one level for a while. A hint will just give you to first lace, which is usually enough to get the word.

Whilst it’s not my favorite game available, as part of the Apple Arcade you get to eliminate all ads, which as anyone who’s been playing mobile games on iPhone in the last few years can tell you, are extremely annoying in free games. So for an ad-free experience, it could be worth checking out.

SpellTower is another game that you get when you sign up to the Apple Arcade, and for some people, it may be worth the subscription fee alone. There’s a variety of different word searches and puzzles within the game, with the Daily Search and Daily Tower being the most popular of the bunch. 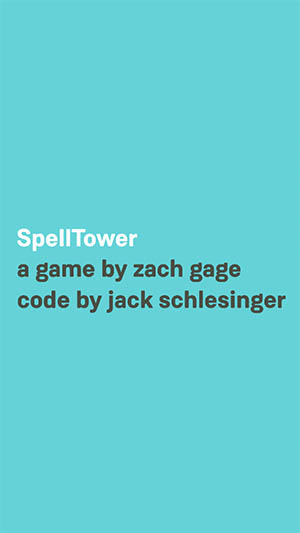 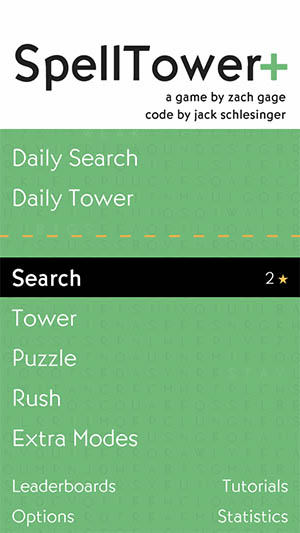 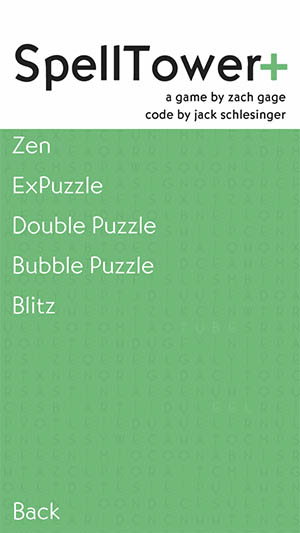 The Search mode is pretty short and simple, with the task to find a long & irregular word that links with the star in the middle. You have to be pretty tactical with it, as you can make up words to remove letters that can allow you to play your larger word. It’s a fun way to spend the odd 5 minutes you have spare. 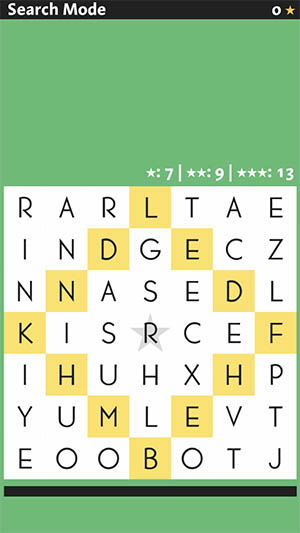 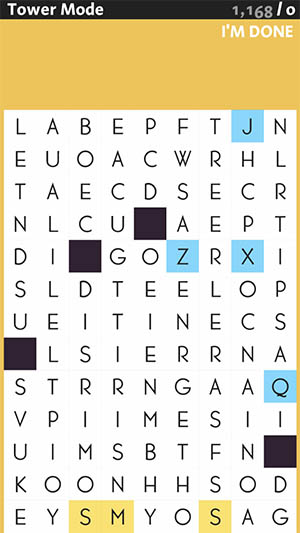 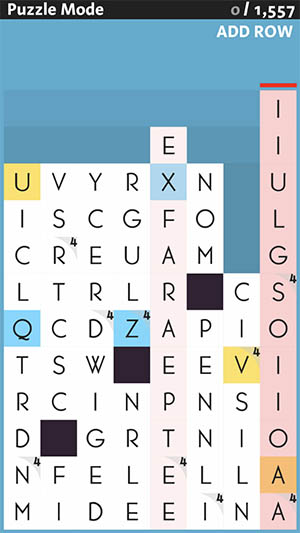 The other Daily game that you can play on SpellTower is the traditional Tower mode, which is trying to make up as many longer words as you can out of a full screen. There’s a couple of quirks here, with some squares being completely blank, some having double scores and squares that if you use them, will take out the entire row that they’re in.

Tower mode is the most popular, and each game will likely take you 10 to 15 minutes depending on how much of a perfectionist you are. There’s also a few other game modes too like Puzzle mode, which requires you to keep your letters below a certain level. 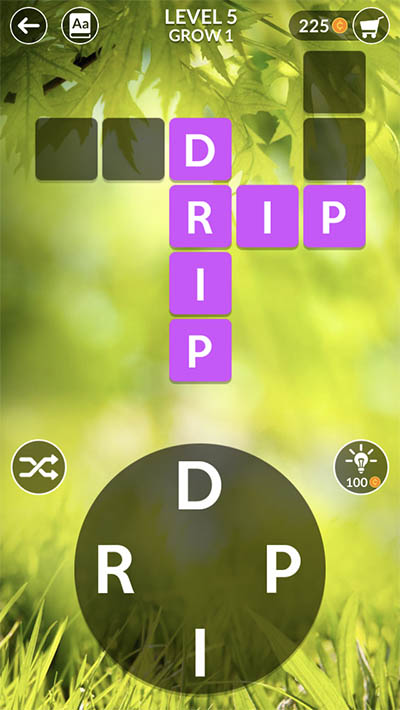 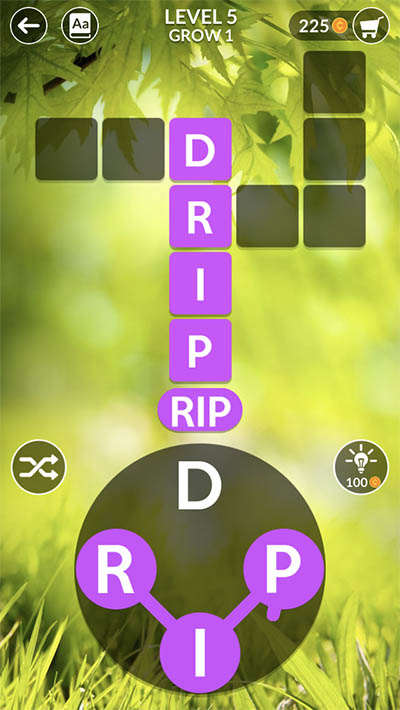 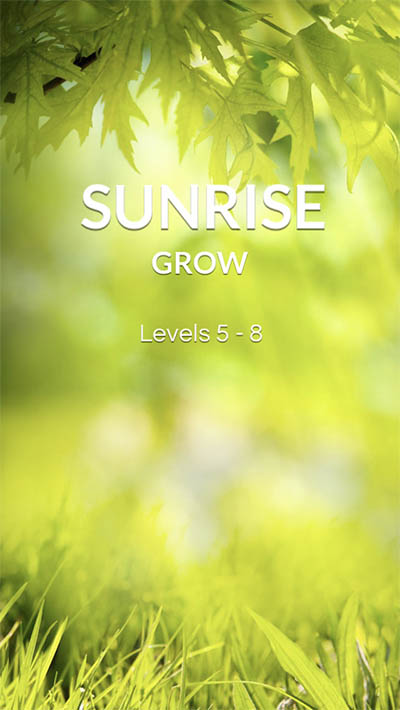 Wordscapes may very well be the most well known word game of them all, with tens of millions of downloads across both Android and iOS, it’s proven to be a hit. So much so that a ton of other imitation apps have popped up following a very similar pattern and style of play.

Though it can get a little monotonous (especially when you’re running through the earlier levels of the game), once you get past level 20-ish, the game starts to get progressively more difficult.

Bear in mind that this is still very early in the game, as there are 6000 official levels of the game – and even when you complete these, you can progress onto the “Master” levels, which are essentially jumbled up versions of previous puzzles. There are many thousands more master levels for you to complete with Wordscapes too.

If you like the accomplishment and feeling of completing a game, then Wordscapes is definitely not for you (unless you want to quit your job and become a full time Wordscapes tester, that is). 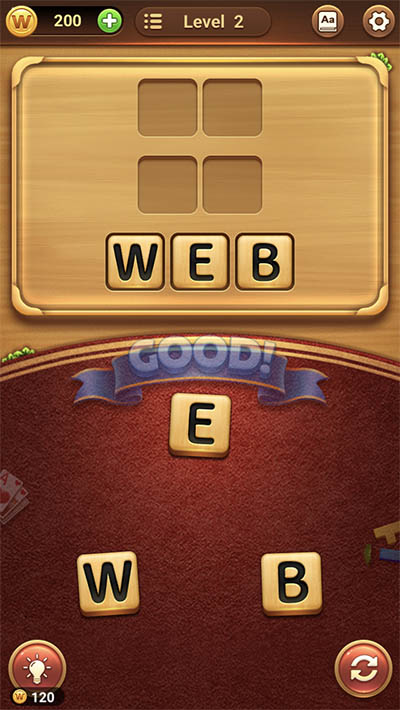 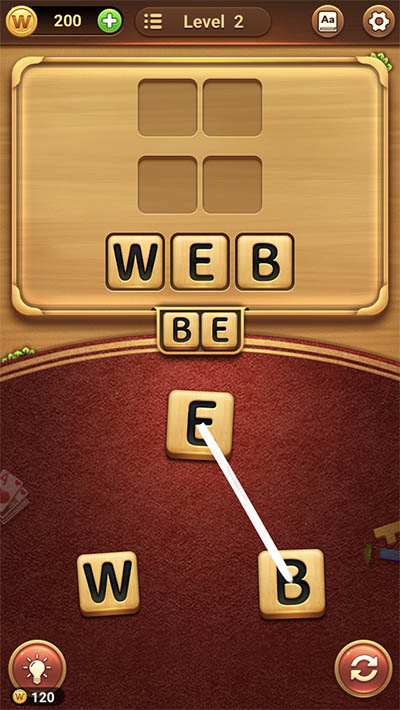 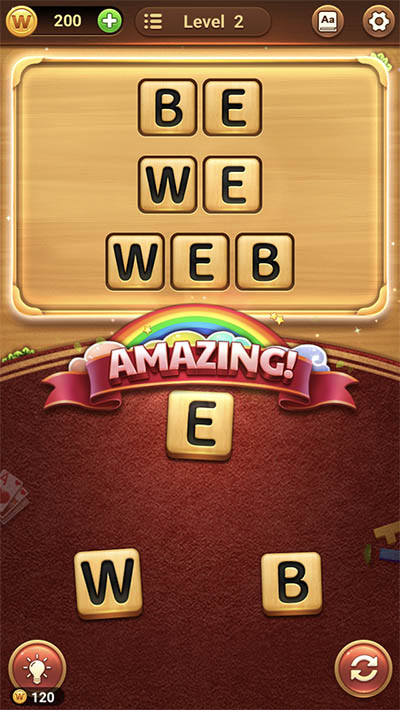 Not much different than Wordscapes but with an entirely different layout, Wordconnect has also racked up millions of downloads over previous years. And like the former word app, there are thousands of levels for you to get through – they start off extremely slowly, and it isn’t until level 100+ that they get a little more difficult.

There are a lot of different customization options in the game, but most of the paid options are not really worth it. You can pay a few dollars extra if you want to rid the game of ads, but they’re actually not that intrusive, so it may not even be worth it for most people.

Whilst it wouldn’t be my first choice of word game, it can prove to be a solid way to spend some time if you like this style of drag-create a word app – just be prepared to make your way through a lot of easy levels at the start! 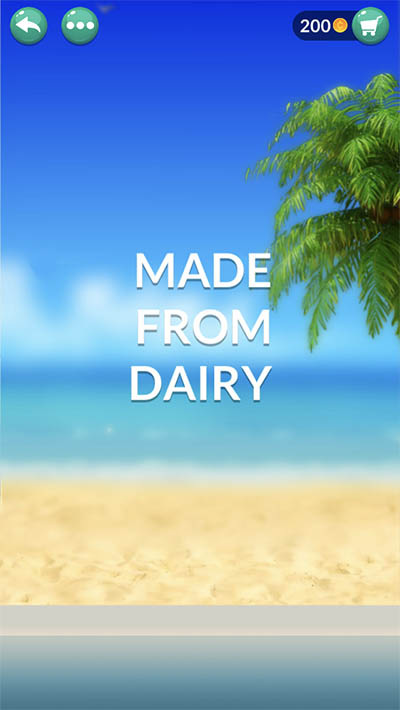 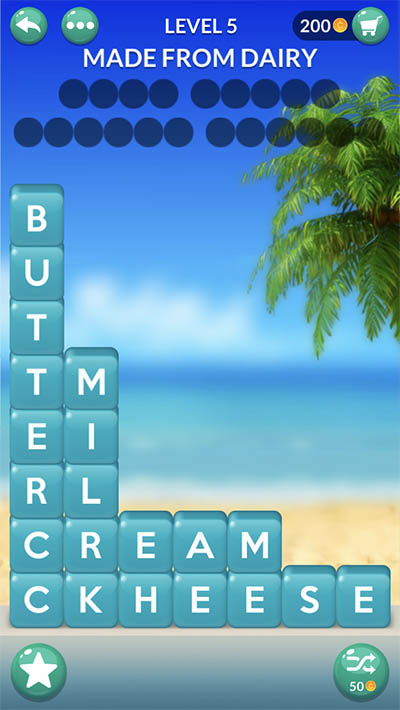 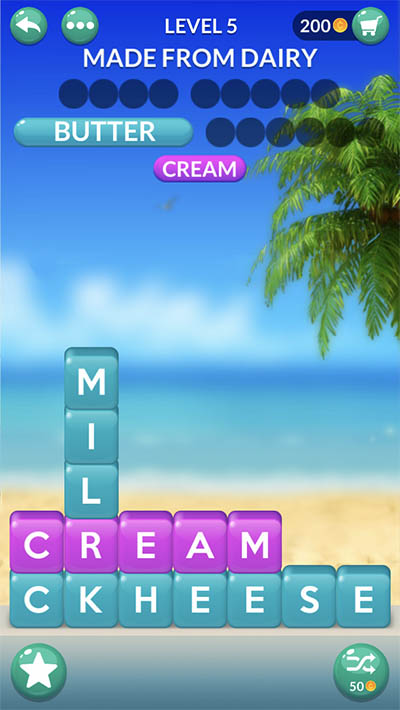 Wordstacks is from the same family as Wordscapes, but it takes a different variation on making up a word. Where in Wordscapes you need to link the word together pretty directly, Wordstacks takes on more of a wordsearch style, with the full words already on display – just often jumbled in with other words.

This does make the game a little more interesting, especially when you get to the later stages of the game, as when you’ve got a full screen of letters it does take some brain power to work out how to fit them in amongst each other.

If you do end up finding it a little tougher than you’d like, then each individual level has a clue that may make things a tad easier. With more than 2000 levels of Wordstacks to complete, it’ll be a while before you need to find a new word game.

Honestly, there are hundreds of different word games out there and many of them work on the same premise – identify the word or figure out what it is. The most popular word games take this and add their own unique twist to it, which helps differentiate it from the crowd (though it’s extremely hard to do this with some, like crossword apps).